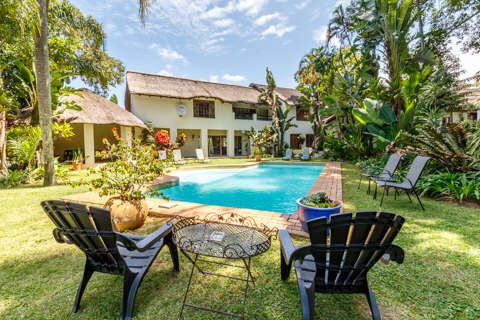 The Best Place to Relax

The lodge is located near Hazyview in the heart of the Lowveld in Mpumalanga, your gateway to the Kruger National Park and Blyde River Canyon. Bushveld home living at its best.

Family-owned and -managed Country Lodge, off the beaten track and run with passion and dedication to service excellence. We offer comfortable and affordable accommodation with delicious meals, as well as hiking trails on the property.

This beautiful Cape Dutch-style building, has long been a renowned hostelry in the Lowveld. Previously a dairy and banana farm, the non-indigenous species have been removed and the farm has been returned to natural bush. Extending to 250 ha, there is an abundance of wildlife. Currently on the farm you are likely to see blue vervet monkeys, grey duiker, red duiker (a very rare species) bushpigs, porcupines and bushbuck.

The name Hamilton Parks comes from any one of a choice of four origins. There were two British generals named Hamilton, active in South Africa during the second Anglo-Boer war from 1899 to 1902. Sir Ian Hamilton was chief-of-staff to Sir George White who (somewhat idiotically) managed to find himself besieged in Ladysmith in 1899. Sir Ian also had the dubious distinction of having written to his wife suggesting that it would be an idea to take on Winston Churchill (then a journalist covering the war) as his ADC. The other Hamilton of this period was Bruce Hamilton, who does not seem to have covered himself in distinction.

Following the end of the war in 1902, a third Hamilton, Sir John Hamilton, sprang to fame as Governor of the Transvaal. However, it seems that the most likely reason for choosing the name Hamilton Parks was to honour James Stevenson-Hamilton, the first senior ranger of the Kruger National Park, whose first house now makes up the dining room of the lodge.

Stevenson-Hamilton’s nickname was Skukuza which, in translation from the language of the local Shangana/Tsonga people, means “he who sweeps clean”. He has, in turn, given this name to the largest camp in the park. Ironically, his Shangana assistant was known as Doispane, which is a corruption of his true name “Dustbin”. The road from Phabeni Gate to Skukuza is still known as the Doispane road.

The Hazyview area is a largely farming-based community, producing a wide range of subtropical fruits, such as mangoes, avocado pears, litchis, guavas, pawpaws and other citrus fruits. The Lowveld is also the second largest banana growing area in the world, with a large percentage of these fruits being grown in the Kiepersol/Hazyview area.